Told in the main by three distinct voices; Adeline who is mute, living in a convent in France in 1952, she’s been there for eight years, never speaking out aloud in all that time. Sebastian is a Jew working in his father’s bank in France, unable to fight in the war due to his limp. One day in the market square he meets Isabelle or perhaps Isabelle in her Olive coat notices the young man dancing with a younger girl, left out by her friends. We get to hear from Isabelle through her letters to her brother Paul who is away fighting in the War, the household a quieter more anxious home without him there. Lastly we have the voice of Tristan, a nine-year old boy whose family have relocated from Paris and reside in the same small village.

This small village is not yet occupied by the Germans and the anxiety about if and when that might happen pervades the book illustrating the uncertainty that coloured everything. With few young men left behind the older generation fret and try to plan, particularly those who are ordered to wear the yellow stars on their sleeves.

All of the narrators speak in the first person present tense which doesn’t normally present any problems for me, but I did feel that perhaps the early part of the book would have felt a little smoother if at least one of the narrators had been in a different tense. As it was, the reader is in the dark for quite some time about the links between the characters, which of course the author intended, as this meant that the revelation was all the more potent.

This was a powerful story, made all the more poignant because it has its heart in a real-life event that took place during World War II and I can absolutely see why the author felt it was only right to put that story at the centre of a tale which is part love story but more a reflection of what life in wartime was really like. I have now read a couple of books set in France during the war as well as a huge amount set in England, throughout them all there is the human spirit which keeps the characters putting one foot in front of the other coupled with a huge amount of uncertainty on how to keep themselves and their loved ones safe, whether that be at home, in a temporary home or fighting for freedom. It is impossible not to be moved by stories set during this time period, all the more so when those stories are told by characters who you can not only picture but imagine them living their lives in such terrible times.

This book’s real power is in its ending, when all the links between the lives reveal themselves in their entirety and any pretence at cosiness is completely banished. So while I may have struggled at first with the seemingly disparate pieces of information while in between the lines the foundation to the story was being laid, the finale more than made up for the earlier confusion. I’d got to know the main characters, had some sympathy for them all, although I have to confess Tristan was a particularly irritating child in a way only a nine-year old can be. As different events occur during the book it amazed me how each one found courage, and even though with the hindsight of time you could see those on the periphery to the story working to their own agenda, The Silent Hours appeared to accurately create a time and place that I am thankful I did not live through. 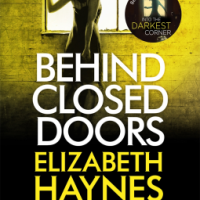