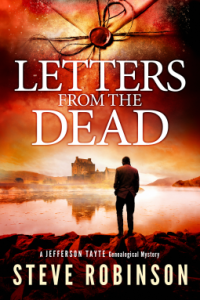 When genealogist Jefferson Tayte is hired to prove the identity of a black sheep in his client’s family tree, he unwillingly finds himself drawn into a murder investigation with nothing more to go on than a 150-year-old letter and a connection to a legendary ruby that has been missing for generations.

As more letters are mysteriously left for him, Tayte becomes immersed in a centuries-old tale of greed, murder and forbidden love that takes his research from the wilds of the Scottish Highlands to the colour and heat of colonial India.

A dark secret is buried in Jaipur, steeped in treachery and scandal. But why is it having such deadly repercussions in the present? Can Tayte find the ruby and prevent the past from repeating itself before it’s too late?

This is the seventh book in the Jefferson Tayte Genealogical Mystery series but it can be enjoyed as a stand-alone story. Amazon

The last book I finished was very different; A Long Goodbye by Anthony Le Moignan is set in the present day and is set in a care home in Cambridge. The main protagonist has been diagnosed with early onset Alzheimer’s. This might make it sound a bit of a gloomy read but I was pleasantly surprised. Anthony Le Moignan is a local Jersey man and I happen to know that this book is on NetGalley for request.

Simon, a successful accountant, has a big problem. The biggest of them all. He checks himself into Orchard Care Home whilst still relatively healthy, the youngest resident by decades. He’s confident he cut all ties with the outside world and is untraceable.

Emma, married with no kids, lives, breathes and manages Orchard Care Home; a position her husband, Michael, used to hold in the good old days. But now he’s soared up the company hierarchy she sees so much less of him.

The attraction between carer and resident is instant, but ultimately destined for catastrophe. Alzheimer’s takes no prisoners and Early Onset, it’s most tragic form, is the cruellest of all.

How can Michael feel threatened by Simon? And what future could Emma have with him?

Simon understands less and less, but knows he has to try and run away from time – to somehow beat the ceaseless clock.

A powerful new novel by Anthony Le Moignan that will make you laugh and cry, for fans of Jojo Moyes, Emma Healey and Nicholas Sparks. Amazon

The next book I expect to read is Lady Bette and the Murder of Mr Thynn by Nigel Pickford as I desperately try to reach at least 15 books for my 20 Books of Summer challenge!

Lady Bette, the 14-year-old heiress to the vast Northumberland estates, becomes the victim of a plot by her grandmother, the Countess Howard, to marry her to the dissolute fortune-hunter Thomas Thynn, a man three times her age with an evil reputation. Revolted by her new husband, Lady Bette flees to Holland. Within weeks, Thynn is gunned down in the street by three hired assassins.

Who is behind the contract killing? Is it the Swedish Count Coningsmark, young and glamorous with blond hair down to his waist? Or is it a political assassination as the anti-Catholic press maintains? Thynn was, after all, a key player in the Protestant faction to exclude the Catholic James, Duke of York, as his brother Charles II’s successor.

Nigel Pickford creates a world of tension and insecurity, of constant plotting and counter-plotting and of rabid anti-Catholicism, where massive street demonstrations and public Papal burnings are weekly events. The action moves from the great landed estates of Syon and Petworth to the cheap taverns and brothels of London, and finally to Newgate and the gallows – the sporting spectacle of the day. In the process, the book gives us a vivid and deeply researched portrait of Restoration society. Amazon

So what do you think? Any of these beauties take your fancy?