My current read is All The Good Things by Clare Fisher which will be published on 1 June 2017 by Penguin.

Twenty-one year old Beth is in prison. The thing she did is so bad she doesn’t deserve ever to feel good again.
But her counsellor, Erika, won’t give up on her. She asks Beth to make a list of all the good things in her life.

So Beth starts to write down her story, from sharing silences with Foster Dad No. 1, to flirting in the Odeon on Orange Wednesdays, to the very first time she sniffed her baby’s head.

But at the end of her story, Beth must confront the bad thing.

What is the truth hiding behind her crime? And does anyone – even a 100% bad person – deserve a chance to be good? Amazon

I have recently finished In Deep Water which is the second in the Cathy Connolly series set in Dublin by Sam Blake. Little BonesA real thriller of a read, it was great to catch up with Cathy Connolly after her first outing in

Good intentions can be deadly . . .

Cat Connolly is back at work. Struggling to adjust to the physical and mental scars, her workload once again becomes personal when her best friend Sarah Jane, daughter of a Pulitzer-winning American journalist, goes missing.
Her father is uncontactable, but her mother reports that he’d believed Sarah Jane was investigating something dangerous – yet the only records Cathy can find suggest that Sarah Jane was just involved in a seemingly innocent children’s project. Sarah Jane was last seen leaving her workplace – a popular Dublin restaurant – but seems not to have made it home. And then a body turns up, and Cathy fears they have failed to save her friend.

But when it transpires that the dead woman is not Sarah Jane, she realises that this case is only just getting started . . . In the world of missing persons, every second counts, but with the clock ticking can Cathy find Sarah Jane before it’s too late? NetGalley

Next I plan to read Greatest Hits by Laura Barnett who wrote one of my favourite reads of last year, The Versions of Us. Greatest Hits will be published on 15 June 2017 by Orion. 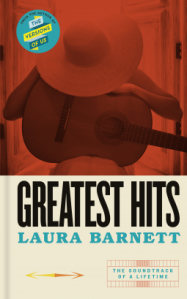 One day. Sixteen songs. The soundtrack of a lifetime…

Alone in her studio, Cass Wheeler is taking a journey back into her past. After a silence of ten years, the singer-songwriter is picking the sixteen tracks that have defined her – sixteen key moments in her life – for a uniquely personal Greatest Hits album.

In the course of this one day, both ordinary and extraordinary, the story of Cass’s life emerges – a story of highs and lows, of music, friendship and ambition, of great love and great loss. But what prompted her to retreat all those years ago, and is there a way for her to make peace with her past?

Daughter. Mother. Singer. Lover. What are the memories that mean the most? NetGalley

So what are you reading this week? Have you read any of these choices? Do you want to?