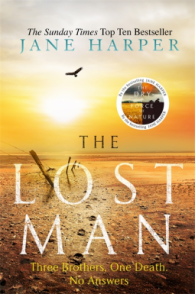 Having come late to the party with Jane Harper’s debut novel The Dry, I was determined not to be left behind by her latest novel, The Lost Man, a standalone read set in the outback of Australia.

The Lost Man had me swept along into an entirely different place, a different lifestyle and that daunting and dangerous landscape. This a book that will evoke a whole range of feelings in its readers and because of that it is not for the faint-hearted.

We start with a description of a headstone, the marker for a legend that has been mutated during the years since it was placed there to mark the place where The Stockman died and on the day in question there is another body close to the headstone, another casualty to a lifestyle which is beyond ordinary comprehension.  Cameron Bright was the middle sibling of three brothers and his elder brother Nathan, and the younger, Bub, gather at the site where he perished through lack of shelter from the overbearing sun, or was the story of his death quite that simple?

Jane Harper is a master at showing (and definitely not telling) and she takes us on a tour, into the house where Cameron ran his  to the family he has left behind, two small girls whose daddy went out shortly before Christmas to fix something on his land and never returned. Cameron was man who knew the land, it was where he was born after all and now his wife Ilse is left to cope without him. Fortunately Uncle Harry is around as is the boy’s mother although as is only to be expected the house almost hums with confusion and grief.

What Jane Harper does that is even more explosive though is to start peeling back the layers of this family. Nathan pretty much takes centre stage as we journey with him back in time and slowly, oh so slowly but perfectly so, we learn the truth about an event many years ago that is still making its mark today.

I really couldn’t tell you what I enjoyed most about this book – was it the brilliant descriptions of a place? It really is testament to the author’s prowess that she managed to conjure up the heat and power of an open landscape of the outback in Queensland, when her reader was sat with the wind and rain howling across a small island on the other side of the world. I haven’t ever been to Australia and if I did the outback would probably not be my chosen destination, and yet for the duration of this book, I was very much there in the house with Isle and her girls Sophie and Lo. I watched Cameron’s mother Liz weep in the deepest of darkness when the generator was switched off by Harry at night-time.  Perhaps the legend of the Stockman had something to do with the appeal, or equally the unravelling of a mystery that is dark, don’t for one moment imagine that the grim scenes at the beginning of the book mean you’ve passed the worst, there are shocks still to be revealed.

In conclusion I loved this book because it covers a great deal of ground, there are deeply upsetting moments but perhaps in keeping with the characters that inhabit the real-life place, there is something very measured about the delivery. No over-hyped action scenes here, just the truth which is sometimes a whole lot worse.

I’d like to thank the publishers Little Brown for allowing me to read a copy of The Lost Man, and to Jane Harper for moving me with this incredible novel. This unbiased review is my thanks to them.

Well it’s good to be back after an unscheduled extended break. In short I’d run out of books to review and we all know you can’t be a book blogger if you are not reading books so I factored in a week’s break, and then I caught the lurgy which put paid to both reading and reviewing!

All’s well now although life is still hectic, and how on earth are we in November already??

Well despite my main reason for taking a break was the lack of books to review, I managed just one in this my first week back blogging…

My excerpt post was from The Lies We Told by Camilla Way, a psychological novel that seemed suitably scary for Halloween week.

On Thursday it was time for Five of the Best spanning the Octobers 2014 to 2018 and reminding me of some fantastic five star reads.

And then we get to the review! Murder by the Book by Claire Harman delves into a Victorian true crime and examines the role that a popular book may have had in inciting violence. Fascinating stuff.

I was reading Three Days and a Life by Pierre Lemaitre a shocking but many layered story about a boy who accidently kills his young friend.

The scene is set beautifully in the small town of Beauval in France where Antoine lives with his mother. His father decamped to Germany and consequently he has a distant relationship with him. The crux of the story is that Antoine hides Rémi’s body and returns home to his loving mother and shelters as much as possible from reality. He has a child’s view of the world, realistically depicted, and alternately buries his head in the sand and suffers the awful anxiety about his crime being discovered.

We then see Antoine years later, as an adult and come to view the events in a slightly different way but it is really the author’s skill in nailing the small town setting as well as it’s inhabitants. Layer on top of that the reader’s conflict about the discovery of the ‘crime’ and I think you’ll understand why this is one of those books I can’t forget. 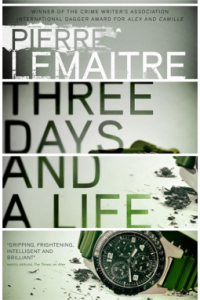 Antoine is twelve years old. His parents are divorced and he lives with his mother in Beauval, a small, backwater town surrounded by forests, where everyone knows everyone’s business, and nothing much ever happens. But in the last days of 1999, a series of events unfolds, culminating in the shocking vanishing without trace of a young child. The adults of the town are at a loss to explain the disappearance, but for Antoine, it all begins with the violent death of his neighbour’s dog. From that one brutal act, his fate and the fate of his neighbour’s six year old son are bound forever.

In the years following Rémi’s disappearance, Antoine wrestles with the role his actions played. As a seemingly inescapable net begins to tighten, breaking free from the suffocating environs of Beauval becomes a gnawing obsession. But how far does he have to run, and how long will it take before his past catches up with him again? Amazon

One thing I have managed to do in my absence is obtain a variety of new books! This week I’m going to share my new additions from NetGalley.

The Liar’s Wife by Samantha Hayes is due to be published on 22 November 2018 by Bookouture and promises to be a shocking psychological thriller. 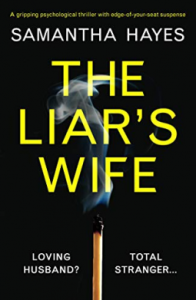 When Ella wakes up in hospital following a hit and run incident, she is scared and confused. Close to tears, her eyes fall on a get-well-soon card on the window sill and the nurse reassures her that her loving husband will be back soon.

But Ella has never been married… Amazon

I am also delighted to have a copy of The Wych Elm by the talented Tana French which is out in paperback already but due to be published for the kindle in February 2019! 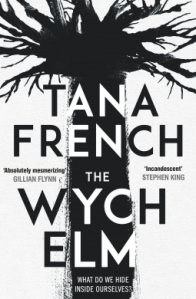 ‘For me it all goes back to that night, the dark corroded hinge between before and after, the slipped-in sheet of trick glass that tints everything on one side in its own murky colours and leaves everything on the other luminous and untouchable.’

One night changes everything for Toby. He’s always led a charmed life – until a brutal attack leaves him damaged and traumatised, unsure even of the person he used to be. He seeks refuge at his family’s ancestral home, the Ivy House, filled with memories of wild-strawberry summers and teenage parties with his cousins.

But not long after Toby’s arrival, a discovery is made: a skull, tucked neatly inside the old wych elm in the garden.

As detectives begin to close in, Toby is forced to examine everything he thought he knew about his family, his past, and himself. Amazon

I have also been gratefully provided with a copy of Stone Mothers by Erin Kelly who is one of my favourite contemporary authors. Stone Mothers will be published on 4 April 2019.

You can’t keep the secret.
You can’t tell the truth.
You can’t escape the past…

Marianne was seventeen when she fled her home, her family, her boyfriend Jesse and the body they buried.

Now, forced to return, she can feel the past closing around her. And Jesse, who never forgave her for leaving, is finally threatening to expose the truth.

Marianne will do anything to protect the life she’s built; the husband and daughter who must never know.

Even if it means turning to her worst enemy…
But Marianne may not know the whole story – and she isn’t the only one with secrets they’d kill to keep. Amazon

In February 2019 the hardback version of Jane Harper’s third novel The Lost Man will be published and I’ve been fortunate to be provided with a copy in advance of this date. 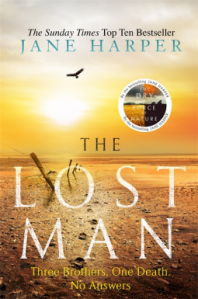 He had started to remove his clothes as logic had deserted him, and his skin was cracked. Whatever had been going through Cameron’s mind when he was alive, he didn’t look peaceful in death.

Two brothers meet at the remote border of their vast cattle properties under the unrelenting sun of the outback. In an isolated part of Australia, they are each other’s nearest neighbour, their homes hours apart.

They are at the stockman’s grave, a landmark so old that no one can remember who is buried there. But today, the scant shadow it casts was the last hope for their middle brother, Cameron. The Bright family’s quiet existence is thrown into grief and anguish.

Something had been troubling Cameron. Did he choose to walk to his death? Because if he didn’t, the isolation of the outback leaves few suspects… Amazon

The excitement about all of these upcoming releases is just what I needed having lost all oomph for life over the last couple of weeks!

What have you found to read?

There has been the annual book sale since my last report and the numbers have jumped to 171!!!

I have added one review of my own books since my last count and although I bought new books at the annual book sale, they were excluded in the terms and conditions, but my copy of The Murder of Harriet Monckton by Elizabeth Haynes was not.

I therefore have 2 2/3 worth of book tokens! 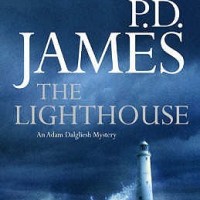 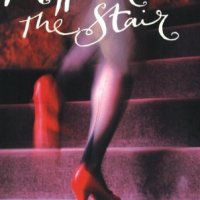