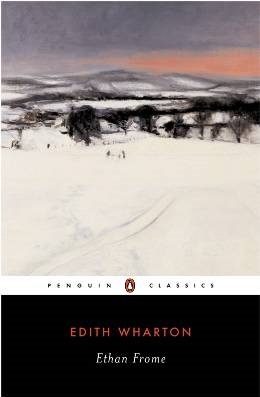 Well, if you are looking for a cheery book, this isn’t for you! But if you want a book that eloquently takes you further and further down a despairing path, you’ve knocked on the right door, much as our enigmatic narrator does when one bleak winter he finds himself stuck and he’s welcomed, well almost, into the Frome’s home.

By the time our narrator hears the story we already know that Ethan looks older than his years, he walks with a pronounced limp and is taciturn in the extreme, but as to his past, the other residents of Starkfield, Massachusetts are not inclined to say. Our narrator is then treated to this tragic tale which involves Ethan, his wife Zeena and her cousin Mattie.

A story of a marriage which has turned sour although it’s clear that Zeena was a different woman, at least in Ethan’s eyes when she first came to Starkfield to care for Ethan’s mother but a mere seven years later, Zeena is unwell. It is up for debate that her reliance on doctors and patent medicines is a necessity or hypochondria.

“Ethan looked at her with loathing. She was no longer the listless creature who had lived at his side in a state of sullen self-absorption, but a mysterious alien presence, an evil energy secreted from the long years of silent brooding.”

Ethan life is cheered when Mattie comes to live in their house to help the ailing Zeena because she brings conversation and a sparkle to the miserable cold life that the pair share. And of course he can’t help but compare the two women and no prizes for who comes off better out of such a comparison. With his habitual reticence Ethan becomes fonder of Mattie and the wheels are set in motion for a tragedy of epic proportions.

For such a slim novel it soon becomes apparent why this is a classic. The writing is beautiful and it effortlessly conjures up the Frome house, the winter in Starkfield that almost becomes a character in its own right.

“The village lay under two feet of snow, with drifts at the windy corners. In a sky of iron the points of the Dipper hung like icicles and Orion flashed his cold fires. The moon had set, but the night was so transparent that the white house-fronts between the elms looked grey against the snow, clumps of bushes made black stains on it, and the basement windows of the church sent shafts of yellow light far across the endless undulations.”

The author really allows the third person narrative to paint the picture for us, her readers in a way Ethan never could do – after all he barely speaks which prompts the thought of why he decides to bare his soul to the man who is seeking shelter in his house. But out rolls the story of the misery of Ethan’s life. First his father’s illness curtailed his brief foray into the world where he studied engineering. Ethan was dragged back to the farm and mill, already floundering would literally become a millstone around his neck. Then his mother fell ill and Zeena cared for her only to marry Ethan and become an invalid herself. Oh but dear reader, this is just the start!

In the hands of a lesser writer all of this unhappiness could have got too much but I finished the book with a huge lump in my throat and yet a deep-seated longing that the book would last just a little bit longer.

Ethan Frome is number 8 on The Classics Club list and the second of my fifty choices that I’ve read and reviewed. A tragedy of mammoth proportions that stole a piece of my heart.

Lizzie Borden took an axe
And gave her mother forty whacks.
When she saw what she had done,
She gave her father forty-one.

On 4 August 1892 Andrew and Abby Borden were brutally murdered in their own home where they lived with Andrew’s daughters Lizzie and Emma and their housemaid Bridget. Lizzie was put on trial for their murder but was exonerated of the crime at her trial three months later.

Sarah Schmidt has recreated the scene on the morning of the murder, and in the months leading up to it using four different narrators: Lizzie, Bridget, Emma and the mystery character Benjamin. These four give us different views of a household which was undoubtedly full of tension with Lizzie and Emma only deigning to call Abby, Mrs Borden.
The thing that struck me most was how young Lizzie’s character seemed to be. The voice is actually a woman in her thirties, unmarried in an age where that was unusual, but she sounds far more like a petulant child. This just adds to the weird atmosphere recreated by Sarah Schmidt with many references to smells and tastes, particularly of the mutton stew which was endlessly reheated. Was this the cause of the sickness that all the members of the household, bar Lizzie were afflicted with? Or was the cause something more sinister? The stickiness of the day, the juiciness of the endless pears that were consumed from the arbour and the meticulous locking of the doors even during the daytime all add to the feeling of claustrophobia that set this household in Fall River, Massachusetts from the rest of the world.

All the best known details of the investigation into the brutal slaying of Mr and Mrs Borden are included, some in the present day narrative which runs throughout the book, some in the flashbacks that give the background to past conflicts that are still running, no doubt because the two daughters should have left long ago. We are given some insight as to why Emma stayed, which was due to the unnaturally symbiotic relationship with Lizzie, but no clue was offered as to why none of the local men had asked for Lizzie’s hand in marriage.

The style of writing took a little while to acclimatise to, but once I got into the stride of the book I was eager to see what theories as to what happened on that fateful day the author would propose and I’m glad to say that no single theory held sway over another, with Sarah Schmidt giving the reader the chance to come to their own conclusions based on the evidence produced.

I have to admit I only really sympathised with one of the characters who narrates this story and that was Bridget, the Irish housemaid who crossed the ocean for a better life and has been saving money to return home to her family but maybe that was because she had the most ‘normal’ of voices. Andrew is presented through the eyes of all of the characters as a harsh father and Abby as a spiteful and bitter step-mother. The undercurrents of distrust and outright hostility are then thrown into focus by the appearance of John Morse, the brother of the Sarah, Andrew Borden’s first wife and mother to Emma and Lizzie. In some ways by the time I completed the book, whoever the murderer was, the deaths seem almost inevitable.

In conclusion See What I Have Done is an unusual and fascinating read, but far from a comfortably one; the writing so vivid I feared sensory overload and as a result I foretell a pearless future for this reader!