Estelle Paradise woke up one morning to find baby Mia missing from her cot, not only that but her clothes, nappies and all the other paraphernalia that goes along with a small baby has disappeared too.

As the title doesn’t just beg comparisons, it actively behaves like a teenage cheerleader to make sure we don’t miss them, to the recent hit books in the psychological thriller/domestic noir genre of Gone Girl and Girl on the Train, it would be remiss of me not to comment on them; this definitely fits into the psychological thriller genre, there is an unreliable narrator and someone is missing! That said, this is actually a far more thoughtful book, dealing with postpartum psychosis although efforts have been made to create the tension and twists and turns required to match these books. More of that later…

We first meet Estelle when she is in a hospital bed following a car accident, oh and part of her ear is missing! She has police guards at the door and her husband Jack is firing questions at her about what has happened to baby Mia, there is just one problem, Estelle has amnesia and can’t remember.

The media goes wild when the news breaks that Estelle didn’t report Mia missing and the assumption is made that one or both parents are involved in her disappearance, after all, what other explanation could there be? Estelle is quickly packed off to psychiatric hospital to help recover her memory and vast swathes of the book are taken up with her sessions with Dr Ari and Estelle and Jack’s history told through flashbacks. What the public doesn’t know and the reader does is that Estelle struggled with motherhood and her biggest fear is that she did have something to do with Mia’s disappearance, and as such this is a fascinating look at postpartum psychosis. So to the characters: I was quite ok with not liking many of the characters, I did have some sympathy with Estelle especially as her history was revealed, but I found Jack lacked depth, if you want a portrayal of the most emotionally absent husband, this is your book.

So back to the twists and turns, despite a strong start I found these to get progressively more far-fetched and at that point I found this book harder to engage with. The biggest surprise is when we find out the solution to the mystery the book carries on for a considerable amount of time, this to me felt like overkill and is the part that made me decide that I won’t be recommending this one to other readers, simply it should have finished at what I consider to be the right time.

I was lucky enough to receive my copy of this book through Amazon Vine in return for my honest opinion. Little Girl Gone also appears to being published under the title Remember Mia, which to my mind is a far more appropriate title, and is due to be published today, 24 September 2015.

The very worst crimes are those we commit against the ones we love
Motherhood hasn’t come at all easy for Molly Anderson. But she’s finally enjoying life as mother to five-year-old Ella and as Arts reporter for the small but respectable Ridgedale Reader. That is, until a body is found in the woods adjacent to Ridgedale University’s ivy-covered campus. This is a discovery that threatens to unearth secrets long buried by the town’s most powerful residents, and brings Molly to two women who are far more deeply connected than they have ever realised.
Where They Found Her is a riveting domestic thriller which offers a searing portrait of motherhood, marriage, class distinctions and the damage wrought by betrayal. NetGalley

I have just finished Little Girl Gone by Alexandra Burt

Please see yesterday’s post for the synopsis and a taster from this book.

Next I am going to read one of my choices for the 20 Books of 2015 Summer Challenge, which I failed miserably; The Night Watch by Sarah Waters

Moving back through the 1940s, through air raids, blacked-out streets, illicit partying, and sexual adventure, to end with its beginning in 1941, The Night Watch tells the story of four Londoners—three women and a young man with a past—whose lives, and those of their friends and lovers, connect in tragedy, stunning surprise and exquisite turns, only to change irreversibly in the shadow of a grand historical event. Goodreads

My opening comes from Little Girl Gone by Alexandra Burt

A baby goes missing. But does her mother want her back?
When Estelle’s baby daughter is taken from her cot, she doesn’t report her missing. Days later, Estelle is found in a wrecked car, with a wound to her head and no memory.
Estelle knows she holds the key to what happened that night – but what she doesn’t know is whether she was responsible… Amazon

‘Mrs Paradise?’
A voice sounds out of nowhere. My thoughts are sluggish as if I’m running under water. I try and try but I’m not getting anywhere.
‘Not stable. Eighty over sixty. And falling.’
Oh God, I’m still alive.
I move my legs, they respond, barely, but they respond. Light prowls its way into my eyes. I hear dogs barking, high pitched. They pant, their tags clatter.
‘You’ve been in a car accident.’
My face is numb, my thoughts vague, like dusty boxes in obscure and dark attic spaces. I know immediately something is amiss.

Do you want to know more? Or perhaps you’ve already read this book?
Please leave your thoughts and links in the comments box below

I’ve just started reading Can Anyone Help Me? by Sinéad Crowley 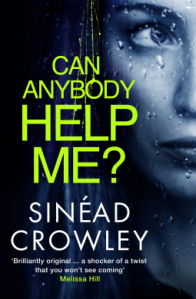 It was crazy really, she had never met the woman, had no idea of her real name but she thought of her as a friend. Or, at least, the closest thing she had to a friend in Dublin.
Struggling with a new baby, Yvonne turns to netmammy, an online forum for mothers, for support. Drawn into a world of new friends, she spends increasing amounts of time online and volunteers more and more information about herself.
When one of her new friends goes offline, Yvonne thinks something is wrong, but dismisses her fears. After all, does she really know this woman?
But when the body of a young woman with striking similarities to Yvonne’s missing friend is found, Yvonne realises that they’re all in terrifying danger. Can she persuade Sergeant Claire Boyle, herself about to go on maternity leave, to take her fears seriously? NetGalley

I have recently finished Deadly Divorces by Tammy Cohen which I found within my brother’s extensive true crime selection. 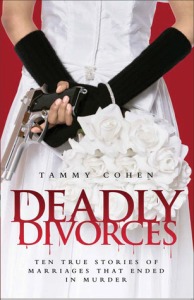 What makes a model father murder his estranged wife, then go on TV pleading for her to come home? How does a devoted wife and mother walk into a beauty salon and shoot her ex-husband’s pregnant lover in cold blood?
No one ever knows what really goes on behind the closed doors of a marriage in freefall. The people in this book weren’t born evil, but in the heat of a relationship break-up, all restraint melted and violent passions spiralled out of control.
The most basic of emotions are involved in these stories of spouses who have gone to extreme lengths to rid themselves of their partners. Goodreads

A baby goes missing. But does her mother want her back?
When Estelle’s baby daughter is taken from her cot, she doesn’t report her missing. Days later, Estelle is found in a wrecked car, with a wound to her head and no memory.
Estelle knows she holds the key to what happened that night – but what she doesn’t know is whether she was responsible… Goodreads