Quieter than Killing starts with a chilling prologue; a young boy listens to the sound of a car being washed, carrots being chopped and a boy in a red bedroom surrounded by a girl’s possessions. This outwardly domestic scene has an unfathomable undercurrent that let me know from the first short sentence that the latest book in the DI Marnie Rome series, her fourth outing, was going to be a real treat.

So starts another brilliant outing for DI Marnie Rome and her partner DS Jake Noah in a race against time to work out what links what appears to be violent attacks on people who have previously been convicted of crimes as disparate as kidnapping and assault. Then the new perpetrator goes too far and one of their victims dies. Who is picking these latest victims and why won’t they reveal who is hurting them? With crimes that seem to take no account of age, sex or years since the original crime, finding the killer is going to need the sharpest of detectives. Meanwhile Marnie is left shaken when her parent’s former home is burgled and her tenants badly hurt at the same time and are in the hospital.

During earlier books in this series we’re aware of the crimes committed by Marnie’s foster brother Stephen and his mischief-making is still ongoing, as are Jake’s problems with his younger brother who has been embroiled in the local gangs. This mixture of police investigation with their personal problems is one of the aspects I really enjoy and the two worlds are becoming too close for comfort for both officers. The pair find themselves investigating the gangs and their increasingly young recruits. And then things seem to get personal and with Marnie’s boss, and chief protector and supporter, off work with a serious illness, Marnie has to learn to confront attacks both personal and professional without him at the same time she has to prove herself to the woman drafted in to lead the Murder Investigation Team.

The plotting as ever is exquisite with perfect pacing which takes us down more than one blind alley, each time the tension rises to a new height. This is the twistiest of the series yet, but the author keeps a handle on the strands so that at no time did I consider any revelation, one too many. It is refreshing to be able to relish a story without feeling as if everything is positioned just to confuse, but that these events are not only possible, but likely to happen.

Of course the most engaging of plots wouldn’t get far without great characters and whilst the two detectives are already well-defined, they show parts of their characters that haven’t been quite so obvious before and they are joined by a great supporting cast. To Sarah Hilary, it doesn’t matter if you are a goodie or a baddie, she will add layers to both surprise and delight.

So we have plot and characters and even better Sarah Hilary adds a brilliant turn of phrase to the trinity. For anyone who is under the misapprehension that crime writers can produce a great book without knowing their crime as it is all about the whodunit and less about the well-crafted phrase, all I can say is read this book and experience how great a read can be when all three come together.

I am very grateful to the publishers Headline who allowed me to read an advance copy of Quieter than Killing ahead of publication of 9 March 2017.
Previous books in the DI Marnie Rome Series:

Someone Else’s Skin
No Other Darkness
Tastes Like Fear 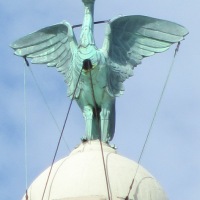