As I write this we are preparing for storm Angus which is getting ever closer to the Channel Islands so hopefully all is well and he’s passed over without causing too many problems – but I’m quite happy with the warning to all Islanders to ‘Avoid outside activity’ which sounds very much like stay inside and read a book!

Cleopatra Loves Books got a quote inside the paperback edition of Distress Signals by Catherine Ryan Howard, a book that has seriously put me off considering a cruise… ever! Even better I am sharing with so many other lovely book bloggers

I started off the week with a five star review for Another Day Gone by Eliza Graham. I don’t understand why this author isn’t more widely celebrated, and this story of a past atrocity and the London bombing was both compelling and thought-provoking.

My extract post on Tuesday featured Belinda Bauer’s latest book, The Beautiful Dead; there are few books that have such an attention grabbing opener!

On Wednesday I was able to brag about a truly wonderful week of reading ahead, featuring Beryl Bainbridge and the fabulous Val McDermid.

On Thursday I posted my review of In Her Wake by Amanda Jennings. Having seen so much praise heaped on this book I bought a copy back in March and sadly it was bumped of the schedule at least twice – it was amazing and I awarded my second five stars for the week.

My review on Friday was for The Stranger In My Home by Adele Parks. I’d always passed this author’s books by without checking out the synopsis; they weren’t what I’d assumed and this is a compelling tale of two babies switched at birth with a dark undertone…

Yesterday saw me reviewing my third book by Beryl Bainbridge of 2016 having only ‘discovered’ her writing earlier this year, I am making up for lost time – Sweet William is a misleading title. William is not sweet but Bainbridge managed to make me judge Ann quite harshly as his willing victim.

I discovered a book that is probably one of my favourite reads of all time. This was an accidental find having half-watched a bit of a TV drama and decided (as always) that I’d rather read the book – and I did! The book being The Go-Between by L.P. Hartley which seems to have been a set read for most schools in the UK, except mine. It’s ok, I do think I probably appreciated the nuances far better now than I would have as a teenager but really… why were we not given this one to read?
You can read my review here.

‘The past is a foreign country: they do things differently there’
When one long, hot summer, young Leo is staying with a school-friend at Brandham Hall, he begins to act as a messenger between Ted, the farmer, and Marian, the beautiful young woman up at the hall. He becomes drawn deeper and deeper into their dangerous game of deceit and desire, until his role brings him to a shocking and premature revelation. The haunting story of a young boy’s awakening into the secrets of the adult world, The Go-Between is also an unforgettable evocation of the boundaries of Edwardian society. Amazon

Two additions this week… First up a request that was granted by NetGalley which I suspect from the  fantastic review written by Jo of My Chestnut Reading Tree will be incredibly emotional – A Mother’s Confession by Kelly Rimmer.

He’s dead and I’m safe, but I’m still scared. Sometimes I actually miss him, but then in the very next breath I find that I hate him so much that I hope there is a hell, just so that he can be suffering like he left me here to suffer.’

Olivia and David were the perfect couple with their whole lives in front of them. When beautiful baby daughter Zoe came along, their world seemed complete.

But now David is dead and Olivia’s world is in pieces. While she is consumed with grief, her mother-in-law Ivy is also mourning the loss of her son. Both women are hiding secrets about the man they loved. Secrets that have put the family in danger.

Something was very wrong in Olivia and David’s marriage. Can Olivia and Ivy break their silence and speak the truth? A mother should protect her child, whatever the cost…shouldn’t she? NetGalley

I also received a copy of The Chemist by Stephanie Meyer who has turned her hand away from Vampires and towards a thriller. I’m intrigued to try this one out although I’m not entirely sure the underlying plot is one that I will enjoy. 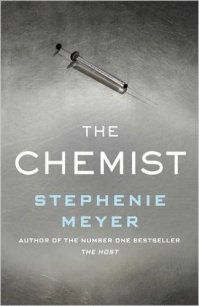 She used to work for the U.S. government, but very few people ever knew that. An expert in her field, she was one of the darkest secrets of an agency so clandestine it doesn’t even have a name. And when they decided she was a liability, they came for her without warning.
Now she rarely stays in the same place or uses the same name for long. They’ve killed the only other person she trusted, but something she knows still poses a threat. They want her dead, and soon.
When her former handler offers her a way out, she realises it’s her only chance to erase the giant target on her back. But it means taking one last job for her ex-employers. To her horror, the information she acquires makes her situation even more dangerous.
Resolving to meet the threat head-on, she prepares for the toughest fight of her life but finds herself falling for a man who can only complicate her likelihood of survival. As she sees her choices being rapidly whittled down, she must apply her unique talents in ways she never dreamed of. Amazon

Since my last post I have read 3 books and managed to gain just 2, but… disaster struck and I miscounted 1 book last week, so my TBR is still standing at 178 books!