When Colonel Peter Cartwright, their commander from the war, is found dead with the ace of hearts, the blood card, next to him Max Mephisto and DI Edgar Stephens are summoned to London and put in charge of a secret investigation into his death.

Racing back to his current investigation in Brighton where Edgar is probing the mysterious death of fortune teller Madame Zabini he is soon off on his first aeroplane trip to New York, a fifteen hour journey on the trail of the murderer.

The links to the world of the theatre are really strong in this, the third outing of Stephens and Mephsito and reach back in time. Max and Edgar are tracking down some old-timers from the world of the variety shows which are now beginning to fear their fate with the advent of television. And it is time to be worried with a terrific surge in families buying sets to watch the Queen’s Coronation. Max was unable to take the trip to New York as he has dipped his toe into the world of television and is performing a magic show live for the small screen, a show that will follow the main event of the day. His new agent Joe Passolini has promised that millions will watch Those Were The Days, the greatest variety show to reach into the drawing rooms of the UK.

The two plots, one dealing with deaths of those linked to the theatre and another strand devoted to the gypsy’s who deliver the entertainment on the pier. Stephens and his Sergeants Bob Willis and Emma Holmes are far from convinced that Madame Zabini’s death was suicide, as Bob succinctly put it:

‘You’d think, being psychic, she’d know if someone was going to do her in’

When her son receives a letter asking him to ask Stephens what the Magic Men knew, the operation he was part of with Max during the war, the feeling that something was not quite right just intensifies. The problem is apart from handing over the note the family aren’t terribly forthcoming, having an aversion to the police.

My love of these two crime fighters hasn’t abated one little bit and this proved to be a fun read, all deaths happen ‘off-page’ to cause minimum distress to the reader. The plot has an old-fashioned feel to it, matching the time period perfectly, consisting of cryptic crossword puzzles and a network of characters where even the most shadowy, could be kindly be described as ‘misunderstood’ That’s not to imply there isn’t any action, there is, and the descriptions are brilliant. The portrayal of the build up and ultimately to the day of the coronation itself, one full of excitement as the new Elizabethan age dawned was fantastic I felt I was right there with the people who partied despite the rationing, which was still in place, and shows went on to please the new audience in front of their televisions.

Elly Griffiths manages to sneak plenty of historical facts into this engaging and evocative mystery of an era that doesn’t get as much exposure as the preceding decades. She effortlessly transports us to the time and I’m delighted that her female characters are so strong despite being true to their time. For those who have read the previous books, it is an absolute delight to see the character progression, the bonds that have been forged in times of adversity lending a depth to such a fun read. So it isn’t only long live the Queen but long live Max Mephisto and DI Edgar Stephens!

I was delighted to receive an advance review copy of this book ahead of publication next week and this review is my thanks to the publishers Quercus Books, and of course the fabulous Elly Griffiths.

The Zig-Zag Girl
Smoke and Mirrors 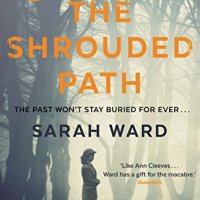