Last Week on the Blog

I started the week with a review for one a contemporary fiction story with a dark edge; The Accidental Life of Greg Millar written by Aimee Alexander

On Tuesday I was part of the blog tour for Don’t You Cry by Mary Kubica, an excellent read in this, her third book. You can tell I like this author as her second book, Pretty Baby is sitting in my header picture!

And on Wednesday I kept you updated on my reading choices for the week which include two big names; Mark Billingham and Sharon Bolton.

And I finished the week with what is probably my favourite crime fiction read of the year; Daisy In Chains by Sharon Bolton received the full five stars from yours truly in this review.

The eagle-eyed amongst you may have noticed my reading has slowed to a snail-like pace, this week’s excuse is I took a trip to London with my darling daughter, a birthday present to her and to get wedding accoutrements, including the dreaded hat for me. Thanks to a wonderful woman in Debenhams on Oxford Street the hat has now arrived in Jersey. The weekend saw us walk over 20,000 steps both days so exercise targets were met too.

In the evening we went to see Charlie and the Chocolate Factory at The Theatre Royal in Drury Lane. It was a wonderful production with the starring role(s) definitely going to the Oompa Loompas!

On Tuesday I was thrilled to spot a tweet from Catherine Ryan Howard advertising Distress Signals with a quote from my review!

I also spotted this on Amazon for Little Bones by Sam Blake so I’m feeling just a little bit famous this week.

Incredibly engrossing with many twists & turns along the way…I would happily recommend Little Bones to anyone looking for a fast paced crime thriller Swirl and Thread Blog The start of an exciting new crime series introducing fearless Detective Cat Connolly… one of the year’s most thrilling reads. Easons Little Bones is a fascinating story about old sins and family secrets. I found the book engrossing from the start, thanks to both the interesting story and its characters. — Magdalena Johansson A Bookaholic Swede Blog I was incredibly impressed by Little Bones. If you like your crime fiction to involve the more traditional police procedural, one that has a little more complexity to the generic, this may well be a book that you will really enjoy. Cleopatra Loves Books Blog Little Bones has suspense, mystery, suspicious death, festering families, a brilliantly executed plot, PLUS characters with plenty of flavour Little Bookness Lane Blog

First up Truly Madly Guilty by the outstanding Liane Moriarty which will be published by Penguin UK on 28 July 2016.

Despite their differences, Erika and Clementine have been best friends since they were children. So when Erika needs help, Clementine should be the obvious person to turn to. Or so you’d think.
For Clementine, as a mother of a two desperately trying to practise for the audition of a lifetime, the last thing she needs is Erika asking for something, again.
But the barbecue should be the perfect way to forget their problems for a while. Especially when their hosts, Vid and Tiffany, are only too happy to distract them.
Which is how it all spirals out of control… NetGalley

Another one from Twenty7 Books is Cut to the Bone by Alex Caan which isn’t out until 3 November 2016. 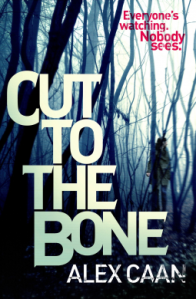 Ruby is a vlogger, a rising star of YouTube and a heroine to millions of teenage girls. And she’s missing. She’s an adult – nothing to worry about, surely? Until the video’s uploaded. Ruby, in the dirt and pleading for her life.
Who better to head up the investigation than the Met’s rising star, Detective Inspector Kate Riley? She’s leading a shiny new team, high-powered, mostly female and with the best resources money can buy. It’s time for them to prove what they can do. Alongside her, Detective Superintendent Zain Harris – poster boy for multiracial policing and the team’s newest member – has his own unique contribution to make. But can Kate wholly trust him and when he’s around, can she trust herself?
Ruby’s millions of fans are hysterical about what may have happened to her. The press is having a field day and as the investigation hurtles out of control in the glare of publicity, it becomes clear that the world of YouTube vloggers and social media is much, much darker than anyone could have imagined in their worst nightmares. And the videos keep coming . . . NetGalley

And… drum roll… I have a copy of Gilly Macmillan’s second book; The Perfect Girl which has already been published in eBook format but will be out in paperback on 25 August 2016 by Little Brown Book Group.

To everyone who knows her now, Zoe Maisey – child genius, musical sensation – is perfect. Yet several years ago Zoe caused the death of three teenagers. She served her time, and now she’s free.
Her story begins with her giving the performance of her life.
By midnight, her mother is dead.
The Perfect Girl is an intricate exploration into the mind of a teenager burdened by brilliance, and a past that she cannot leave behind. NetGalley

In the post I have a copy of Intrusion by Mary McCluskey a psychological thriller that is being published on 1 July 2016 by Little A.

Kat and Scott Hamilton are dealing with the hardest of losses: the death of their only child. While Scott throws himself back into his law practice in Los Angeles, Kat is hesitant to rejoin the workplace and instead spends her days shell-shocked and confused, unable to focus.
When an unwelcome face from Kat’s past in England emerges—the beautiful and imposing Sarah Cherrington—Kat’s marriage is thrown into a tailspin. Now wealthy beyond anything she could have imagined as a girl, Sarah appears to have everything she could need or want. But Sarah has an agenda and she wants one more thing. Soon Kat and Scott are caught up in her devious games and power plays.
Against the backdrops of Southern California and Sussex, in spare and haunting prose, Mary McCluskey propels this domestic drama to its chilling conclusion. Goodreads

I also have a copy of Sabine Durrant’s latest book, Lie With Me which came unbidden ahead of publication on 5 July 2016 by Mulholland Books. I strongly suspect I was sent this ARC because I enjoyed the author’s previous books Under Your Skin and Remember Me This Way, both books that I awarded five stars.

It starts with a lie. The kind we’ve all told – to a former acquaintance we can’t quite place but still, for some reason, feel the need to impress. The story of our life, embellished for the benefit of the happily married lawyer with the kids and the lovely home.
And the next thing you know, you’re having dinner at their house, and accepting an invitation to join them on holiday – swept up in their perfect life, the kind you always dreamed of…
Which turns out to be less than perfect. But by the time you’re trapped and sweating in the relentless Greek sun, burning to escape the tension all around you – by the time you start to realise that, however painful the truth might be, it’s the lies that cause the real damage…
… well, by then, it could just be too late. Amazon

And if that wasn’t enough for someone who isn’t acquiring new books… I have also bought a kindle copy of The Mistake by Wendy James. This book was originally bought to my attention by the marvellous Margot Kinberg at Confessions of a Mystery Novelist, if you haven’t done so I highly recommend visiting her blog! 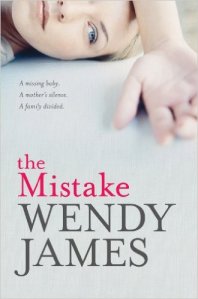 We all have secrets . . . Jodie Garrow is a teenager from the wrong side of the tracks when she falls pregnant. Scared, alone and desperate to make something of her life, she adopts out the baby illegally and tells nobody. Twenty-five years on, Jodie has built a new life and a new family. But when a chance meeting brings the adoption to the notice of the authorities, Jodie becomes caught in a nationwide police investigation, and the centre of a media witch hunt. What happened to Jodie’s baby? And where is she now? The fallout from Jodie’s past puts her whole family under the microscope, and her husband and daughter must re-examine everything they believed to be true. Potent, provocative and compulsively readable, The Mistake is the story of a mother and the media’s powerful role in shaping our opinions. With astonishing insight, it cuts to the heart of what makes a family, and asks us whether we can ever truly know another person. ‘The kind of novel that will have you second-guessing your own reactions and skilfully exposes the troubling expectations we resort to in the absence of hard evidence. Amazon

TBR WATCH
Oh dear oh dear! Since my last count I have read 3 books,  – I have however gained 6 books – the total this week is now standing at a shocking 181 books!
95 physical books
69 e-books
17 books on NetGalley