Caroline Overington has researched the story behind Louisa Collin’s four, yes you read that correctly, four trials for murder. One of the three trials was in relation to the deaths of her first husband Charles Andrews in January 1887, the cause according to the doctor who signed his death certificate was Acute Gastritis, three were in relation to her second husband Michael Collins the man she married just three months after the demise of the first. Michael Collins died on 8 July 1888 of what the post mortem indicated was arsenic poisoning.

This book not only takes us through the suffering of both men as they writhed for days in agony with stomach pain but the job of the somewhat incompetent hangman – Nosey Bob, those who presided over the trials and most importantly the clamour of women’s voices to commute the death sentence passed when Louisa was finally declared guilty in respect of the death of Michael.

As with all these reconstructions of historical crimes one of the main questions is was Louisa guilty of the crime that meant ‘that she hanged from the neck until she was dead.’ It’s certainly far from clear cut, but that isn’t the main thrust of the book which is far more about women’s rights at a time they were treated as children. Louisa hanged on order of laws made by parliament of which she had no say in. She lived a life forever in the fear of abject poverty; if her husband didn’t work, she, and her children, wouldn’t eat and there was no way out of the never-ending cycle of child-birth, the last of Louisa’s babies had recently died when just a few months old.

Louisa isn’t the most sympathetic of characters, but once the death sentence had been passed those women who did have a voice, through their husbands and fathers, began clamouring for the sentence to be commuted. Although some of these were unconvinced of her guilt, by no means all were. There was after all the unpalatable truth that whilst thirty-six men had been unable to reach a consensus of guilt, Louisa was hung on the verdict of the final trial. Al of this carried out in the space of a few short months with a dwindling population of suitable jurors. Quite why there was so much will to retry this woman until the verdict of guilt was reached is unclear,but e can assume that powerful men were clearly determined that their presumption of guilt was the right one.

There is a fair amount regarding the politics of New South Wales at the time of the trials which to be honest meant little to me sitting as I do well over one hundred years later on the other side of the world, but they sound very similar to politics everywhere with the distinction that Australia was at this time trying to move away from being a penal colony to a fully-fledged independent country.

This was a fascinating read although at times I felt that I was bludgeoned by the repletion of information that this was a man’s world and Louisa had no say in the laws. I understand the argument but if Louisa did set about to murder two husbands in such an agonising fashion, she probably understood that if her crimes were discovered that the law was going to act. After all hanging wasn’t a rarity, although in New South Wales the last women prisoner had her sentence commuted.

The afterword takes us through the next few years where due to their vociferous campaigning Australian women were the first in the world to get the vote and spread the word to the rest of the world, including Britain. We also catch up with what happened to Louisa’s children and other key members of the case. A satisfactory ending to a book which gives a factual account of Louisa’s life and trials while bringing to the forefront a fight that would live long after her body had been cut down from the scaffold.

Last Woman Hanged is from my own collection of books, chosen not for the historical factor of this true crime but following my read of the author’s I Came to Say Goodbye which I thoroughly enjoyed. 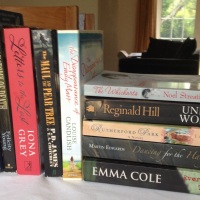