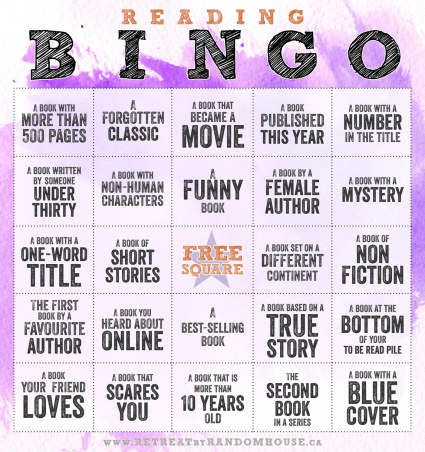 I first saw this on Musings from a Bookmammal blog and thought it looked like great fun. I’ve decided to limit my choices to books I’ve read in 2014, click on the book covers to read my reviews

A Book With More Than 500 Pages

The Secret Place by Tana French
A murder takes place in the grounds of an exclusive girls boarding school I dubbed this book Mallory Towers for grown-ups.  A cracking good mystery with great characters and more than a dollop of humour I flew through the 529 pages in no time at all.

I haven’t read any classic books this year

A Book That Became a Movie

The Talented Mr Ripley by Patricia Highsmith
An unsettling portrait of a man who acts almost without conscience and yet the author managed to make him an object of my sympathy and almost complicit in his desire to get away with his crimes.  This was made into a film in 1999 but I can’t do a comparison as I haven’t watched it.

A Book Published This Year

I have so many contenders for this square and I’m going to choose a 5 star read from the historical fiction genre, Wake by Anna Hope.
I read this book early this year, the centenary of the start of World War I.  Anna Hope has created a moving portrait of three women against the backdrop of the internment of the Unknown Soldier at the Cenotaph, one of those books that is still vivid all these months later.

A Book With A Number In The Title

One Last Dance by Judith Lennox is a historical saga covering the decades from the World War I to the 1970’s
In 1974 Esme decides to hold her 75th birthday in a diminished grand house and the reasons for the choice are revealed by turning back the clock on her life.  All the normal components of love, jealousy, secrets and lies that you’d expect from a great historical saga.

A Book Written by Someone Under Thirty

I really don’t know how old the authors are so nothing for this one.

A Book With Non Human Characters

Nothing for this one either

Not quite as funny as The Rosie Project but Graeme Simsion’s follow up The Rosie Effect still had a fair few humorous moments as our beloved Don tries to get to grips with Rosie’s latest news.

A Book By A Female Author

Keep Your Friends Close by Paula Daly
I had so many to choose from for this category but I settled on an author whose two books I’ve read and awarded 5 stars to this year.  This psychological thriller details what happens when your best friend makes a play for your husband. Populated by a wonderful cast characters both main and secondary.

A Book With A Mystery

I had quite a few options for this square too so plumped for the magnificent The Mysterious Affair at Castaway House by Stephanie Lam.
There are a few mysteries packed between the pages of this novel which is split between the time periods of 1924 and 1965 with the two protagonists each having their own secrets, this was one of those books that I was sad to say goodbye to the characters when I closed the last page.

A Book With A One Word Title

This book by one of my favourite authors Erin Kelly, Broadchurch was originally a TV series which she turned into such a great read that I followed up by watching the series.
Telling the story of those who live in a small seaside town in the aftermath of the death of a child, the large cast well defined to augment a thrilling mystery.

A Book of Short Stories

My collection of short stories is A Twist Of The Knife by Peter James, one of my favourite authors.  This collection of thirty stories varies between supernatural, situational and crime fiction.

A Book Set On A Different Continent

Little Lies by Liane Moriarty is situated at a primary school in Australia which just illustrates that this environment produces identikit characters across the world.
This is a book that has the right mix of the good read elements: drama, mystery, issues, characters and plot. A superb read which is one of my favourite of 2014.

A Book of Non-Fiction

I have read several non-fiction books about historical crime this year but Victorian Murderesses by Mary S. Hartman is my stand-out favourite.
Each chapter features one British and one French woman accused of murder in the Victorian times and uses their alleged crimes to look at the issues facing middle class women during the time period.

The First Book By A Favourite Author

After enjoying Keep Your Friends Close I had to check out the debut novel by Paula Daly, Just What Kind Of Mother Are You?
A devastatingly good plot, perfect timing to create the upmost tension and characters that you believe in, results a book that no one who loves a good psychological thriller should miss.

A Book I Heard About Online

Since blogging I find most of my new author finds on-line but I heard about After I Left You by Alison Mercer online after following the author on twitter.
This was a lucky find, a character driven book of a young woman making her way in the world in the early nineties, but why did she cut off all the ties to her university friends?

Want You Dead by Peter James is the 10th in the Roy Grace series set in Brighton.  According to Amazon this book has spent 201 days in the top 100 crime, thriller and mystery books so I guess this one counts?
I am a huge fan of this series which has a fascinating story arc concerning Roy Grace’s missing wife and in this episode he is preparing to marry the mother of his son, Noah.  Unfortunately for Grace he is needed to head up a murder investigation…

A Book Based Upon A True Story

Although not based on a particular true story Little Mercies by Heather Gudenkauf was inspired by a newspaper article regarding the case of a mother who left her young child in the back of a car one hot summers day, having forgotten  to drop them off at their nursery for the day.

A Book At the Bottom Of Your To Be Read Pile

This pile is so enormous I can’t possibly dismantle it to see what is at the bottom!

A Book Your Friend Loves

Precious Thing by Colette McBeth is my most lent out book of the year with readers from their early twenties to their seventies all delighted with it.
Written in a form of a (long) letter to the lost Clara by her friend Rachel this tale spans time from the 1990’s to 2007 and had me so desperate to know what happened I was involved in a kitchen disaster from trying to read and cook at the same time.

A Book That Scares You

I’m not easily scared but The Never List by Koethi Zan was a really disturbing read detailing what happens after two girls are kidnapped and held hostage.
Sarah and her best friend Jennifer devise The Never List as children, a way to keep them safe from the vagaries of the world but by the time the two go to college it has become something of an obsession.  What is shocking after all the edicts on how to keep them safe is that they are captured by the Psychology Professor at their college.

A Book That Is More Than 10 Years Old

Murder on the Orient Express by Agatha Christie was first published in 1934 and a great example of why this author was so popular.  A closed room (train) mystery with everyone a potential killer Poirot puts his little grey cells to work to solve the whodunit.

The Second Book In A Series

A Killing of Angels by Kate Rhodes is the second in the Alice Quentin series, a London-based psychologist who investigates a series of crimes.
This book is firmly rooted in the banking crisis where money means more than life. With dead bodies being left in the city with pictures of angels the author also introduced me to some renaissance art.

A Book With A Blue Cover

Sleep Tight by Rachel Abbott is admittedly a greeny blue colour but such a great book about obsession that it couldn’t be missed off this post.
When DCI Tom Douglas is called in to investigate a missing woman and her three children from her home in Manchester he is surprised to find that Olivia’s name has come up in previous investigations. He is left to ponder, how unlucky can one woman be?

Visit to Musings From A Bookmammal to see her responses.

How about you? How much of the card could you fill in?  Please share!