I am currently reading One Last Dance by Judith Lennox

‘Times change, and sometimes for the better…’
As the twentieth century draws to a close, Esme Reddaway knows that she must uncover the truth. A truth that began during the First World War when Devlin Reddaway fell passionately in love with Esme’s elder sister, Camilla, and promised to rebuild his ancestral home, Rosindell, for her.
But the war changes everything and Devlin returns to England to find that Camilla is engaged to someone else. Angry and vengeful, he marries Esme, who has been secretly in love with him for years. Esme tries to win Devlin’s heart by reviving the annual summer dance. But as the years pass she fears that Rosindell has a malign influence on those who live there, and the revelation of a shocking secret on the night of the dance at Rosindell tears her life apart. Decades later, it is she who must lay the ghosts of Rosindell to rest.
Spanning the last century, Esme’s story of sibling rivalry, heartbreak, betrayal and forgiveness is sure to appeal to fans of Kate Morton, Rachel Hore and Downton Abbey. Goodreads

I have just finished reading The Rosie Effect by Graeme Simsion, my review will be following soon. 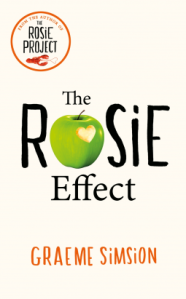 GREETINGS. My name is Don Tillman. I am forty-one years old. I have been married to Rosie Jarman, world’s most perfect woman, for ten months and ten days.
Marriage added significant complexity to my life. When we relocated to New York City, Rosie brought three maximum-size suitcases. We abandoned the Standardised Meal System and agreed that sex should not be scheduled in advance.
Then Rosie told me we had ‘something to celebrate’, and I was faced with a challenge even greater than finding a partner.
I have attempted to follow traditional protocols and have sourced advice from all six of my friends, plus a therapist and the internet.
The result has been a web of deceit. I am now in danger of prosecution, deportation and professional disgrace.
And of losing Rosie forever. Goodreads

Bavaria, Germany, 1947
At the end of the war, Afra Zauner returns to her parents’ cottage on the edge of Mauther Forest. Unmarried, and pregnant. As she struggles to raise her child, her father’s shame, her mother’s fury and the loud whispers of the neighbours begin to weigh upon her. She doesn’t believe in her sin. But everyone else does.
And someone brings judgement down upon her.
Many years later, Hermann Müller is throwing a drunk out of his tavern. A traveller, who won’t stop ranting about a murder left unsolved, about police who never investigated. Out of curiousity, the file is reopened. And in the cold light of hindsight, a chilling realisation creeps upon the community.
No-one ever atoned for Afra’s death. But her story is waiting to be told.
Andrea Maria Schenkel returns to the form of her groundbreaking The Murder Farm, narrating through suspects, victims and investigators to lead the reader to their own awful understanding. Goodreads

Please share your reads with me in the comments box below.