Under a Silent Moon is a departure from the previous books by Elizabeth Haynes as this is more of a police procedural than a psychological thriller.

This book follows an investigation into two deaths discovered in Morden Village. Using dispatch logs, emails and some nifty charts representing the work of a police intelligent analyst which was the author’s previous job. The first body found was that of Polly, a beautiful woman who had many liaisons throughout her time in the village. Polly was found by a friend, bludgeoned to death in her cottage. Soon afterwards the police were reporting to Taryn Lewis that her father Brian Fletcher-Norman was in hospital having suffered a heart-attack and her stepmother had been found dead after her car plunged into a nearby quarry. The police soon suspect that these two deaths ‘under a silent moon’ may be connected.

Each of the six days the investigation took forms the chapters of the book, these are further broken up by the timings detailing the information and decisions being made by the police as well as the actions of the other characters in the village. I found this interesting but it did take a while to get into the book until the characters became more defined. There is the obligatory relationship problems between DCI Louisa Smith and her team, especially Andy Hamilton who have history! The characters are mainly fairly unlikeable, even poor Polly who is now dead but that just gives the reader more perpetrators to choose from.

The ending was really thrilling as the truth of what happened on that autumn night becomes clear to everyone although some are more compromised than others….

A good read which is probably best read in as few sessions as possible to allow the investigation to flow and for the reader to immerse themselves in trying to guess whodunit.

Other books by Elizabeth Haynes

Elizabeth Haynes first book Into the Darkest Corner was one of those books that everyone seemed to be reading. 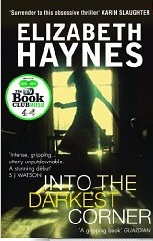 This book leaps straight in with a transcript from a court case in May 2005. After this most of the book is written in two alternate stories, one starting in 2003, the other in 2007. The story of Cathy is about a young woman struggling to cope with OCD which causes her to spend much of her life checking and counting.

This is amazingly well written which gives the reader an insight into how OCD rules the lives of those that live with it. Tension is built and each time Cathy seems to be getting a grip on things something else happens to disturb her both in the past and the present. This is one of those stories which stay with you long after you have read it.

Genevieve is former pole dancer had a good job and was pole dancing for exercise and money to buy the boat. Her former life in London was full of shallow people (except her fellow pole dancer friend) and the boat people are the most generous she’d ever met, Genevieve then finds herself in the most predictable of situations given that she was hiding something on the boat…..

However her third Human Remains was another outstanding read. Please click on the book cover to see my review.

9 thoughts on “Under a Silent Moon – Elizabeth Haynes”